Graduating from the Royal Welsh College of Music and Drama in July 2015, Katie holds a Masters in Music specializing in Orchestral Performance.  As part of the prestigious course Katie enjoyed regular placements with the BBC National Orchestra of Wales and the Orchestra of the Welsh National Opera.

Recent performance highlights include performing in a live broadcast on BBC Radio 3 as part of the 2015 Proms Season; touring to Quiberon, Brittany with Seren Winds to promote Musicales de Quiberon, a new music festival; and leading the RWCMD Symphony Orchestra flute section for the final orchestral concert of the 2014/2015 academic year.

Katie loves discovering and sharing new music and enjoys performing a wide and diverse range of repertoire from many eras, genres, and locations.  She has a particular interest in world and folk music and currently plays with two Cardiff based folk bands.

Having reaped the rewards of a generous musical education supported by the Cornwall Music Service, Katie is very passionate about widening participation to music making to allow the many values of music making to be accessible to all. 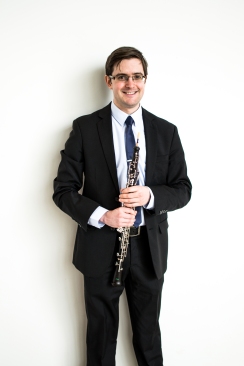 Canadian oboist Eric Wolfe-Gordon recently completed his Professional Diploma in Orchestral Performance at the RWCMD. During his undergrad at McGill, he completed two tours of Canada and the USA with the National Youth Orchestra of Canada in 2008 and 2009. The recording of the 2009 tour was nominated for the JUNO Award for Classical Album of the Year. Whilst studying his for MMus at the RWCMD, Eric premiered a wind quintet with the New London Chamber Ensemble. Eric has performed under conductors including Sir Andrew Davis, James MacMillan, Eamonn Dougan, and Tim Murray, and attended masterclasses with Stefan Schilli, Gordon Hunt, and Pascal Galois. His principal teachers have been Beth Levia, Normand Forget, Catriona MacKinnon, John Anderson, and Sarah-Jayne Porsmoguer.

Michael graduated in 2016 from the Royal Welsh College of Music and Drama in Cardiff, where he studied for an MA in Orchestral Performance with Tim Thorpe and Ian Fisher of the BBC National Orchestra of Wales, and Angus West of Welsh National Opera.  Michael studied BA French-History at the University of Leeds, graduating in 2014. For his year of study abroad in France in 2012-13 Michael studied at the Conservatoire de Strasbourg under Kevin Cleary and Jérôme Hanar on both modern and natural horn.

During his time at RWCMD Michael played in all of the College’s main ensembles.   Notable performances include playing works such as Britten’s War Requiem and Stravinsky’s Rite of Spring in St David’s Hall with the Symphony Orchestra, and a side-by-side concert with the brass of the Welsh National Opera for a composition competition in December 2014.  He also plays with the Young Musicians Symphony Orchestra in London following audition in January 2015, and has been engaged for extra work with the BBC National Orchestra of Wales.  He also took part in placements with Welsh National Opera as part of his postgraduate studies.

As a soloist Michael has performed in and around Cardiff with pianist Sandie Middleton and in Leeds with the university Chamber Orchestra.  In 2016 he will perform with LPO Principal Horn David Pyatt as part of a recital and masterclass, and as soloist with the RWCMD Wind Orchestra. Michael was announced the winner of the Malcolm Arnold Fantasy competition, and as a result has recorded the piece for a CD. 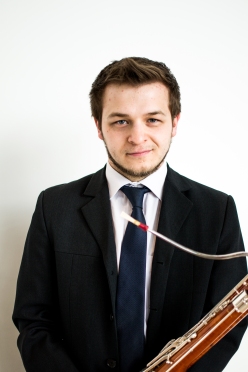 Bartosz Kwasecki graduated from the music school in Gliwice (Poland) in 2008, studying with Jan Hawryszków and Wojciech Front. He earned his Master’s degree in the Academy of Music in Wrocław (Poland) under Dariusz Bator in 2013. He continued his studies at the Royal Welsh College of Music and Drama in Cardiff under Meyrick Alexander, Stephen Marsden and David Buckland, and graduated in 2015.

In 2009, together with bassoon quartet “Diabolus in Musica”, he won the second prize in the International Chamber Music Competition in Jawor and high commendation in the 2010 edition. In 2014 he was awarded a Professional Pathways scholarship from Sinfonia Cymru. The year after, together with “Seren Winds” he won the June Emerson Wind Music Launchpad Prize.

Bartosz began his professional music career in 2008. He played with many orchestras in city of Wrocław such as: “Wrocław Youth Orchestra”, Music Theater “Capitol” and “Sound Factory Orchestra”. In 2011 he successfully auditioned to “I, Culture Orchestra” established on the occasion of Polish presidency in the European Union. Together with ICO Bartosz took part in a European tour during which he played in some of the most prestigious concert halls such as: Royal Festival Hall in London, Berlin Philharmonic, Berwaldhallen in Stockholm, Palais de Beaux-Arts in Brussels, Teatro Real in Madrid, National Opera in Kiev and National Philharmonic in Warsaw. During this tour he played under the baton of Sir Neville Marriner and Paweł Kotla together with soloists Arabella Steinbacher, Peter Jablonski, Anna Baeva and Agata Szymczewska. In 2012 he became a member of the ICO again. He played with the Opera in Wrocław for their 2012-13 season. Since moving to Cardiff, he has performed with the Orchestra of the Welsh National Opera, Sinfonia Cymru, Welsh Sinfonia, Sinfonia Newydd, Sound Affairs and City of Cardiff Symphony Orchestra. Bartosz has just spent ten months as a bassoonist with the young professional orchestra, Southbank Sinfonia, in London.

Laura hails from Driffield, East Yorkshire, where she began learning the clarinet aged eight. She successfully auditioned for a place at the Royal Welsh College of Music and Drama where she graduated in 2013 with First Class Honours. She won a scholarship to study for a Masters in Orchestral Performance at the RWCMD under the tutelage of Robert Plane, Timothy Lines and John Cooper, from which she graduated in July 2015. The course encompassed regular professional placement schemes with Welsh National Opera and the BBC National Orchestra of Wales, with whom she was recently engaged to play for. Laura enjoyed many successes during her time at the college, notably playing Principal Clarinet under the baton of Carlo Rizzi for both Verdi’s Requiem and Britten’s War Requiem, winning the RWCMD Howarth of London Single Reed Prize 2014 and reaching the final of the RWCMD Concerto Competition 2015 playing the Nielsen Clarinet Concerto. Laura is now a freelance professional musician, performing regularly with Seren Winds and teaching the Clarinet and Saxophone at Llandaf Cathedral School and the clarinet at Howells School Llandaf.